It was another epic year for Amazon FBA Business sales in 2018!

We tracked 173 FBA businesses reported as sold which
equates to $257 Million in List Price value.

We’re excited to share with you our insights and show you the findings from the data after tracking the market for over 2 years now. 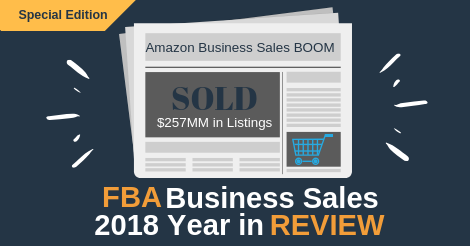 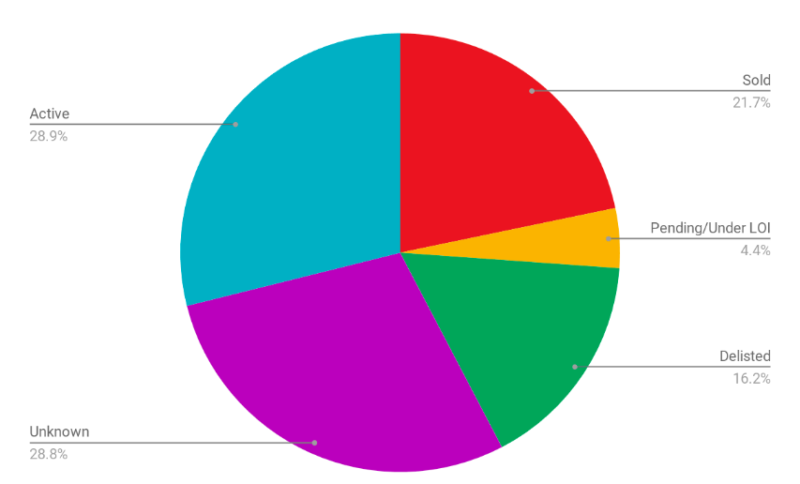 Here’s how these 796 listings breakdown based on the list price. Comparing these figures to those in 2017 might suggest that many sellers have now built a larger business, as the volume of listings >$1MM has increased significantly. 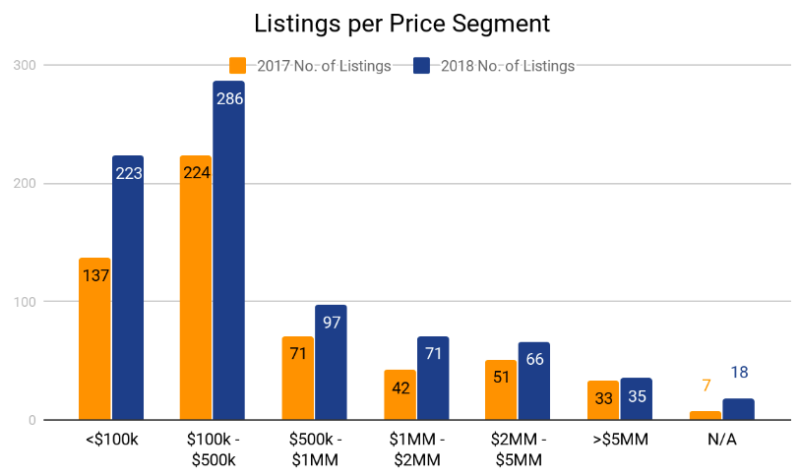 However, for a 2nd year running over 60% of the listings were under $500,000 even though the volume of larger deals increased. Marketplace Pulse reports that there are now over 24,000 businesses doing over $1 million in sales on Amazon marketplaces; a number that grew by 20% from 2017.

Of the businesses listed for sale last year, 30% were noted as doing $1 million or more in revenue (237 of 796). Reported net profits however in this range vary wildly, being anywhere from 1% to 80%. As businesses are generally valued based on a multiple of annual net profit, list prices also fluctuate.

So how many of these million dollar businesses sold?

Despite a 41% increase in new listings last year, the recorded sales were flat compared to the prior period. In 2018 we saw just 1 sale less than the year before which is crazy!

During 2018 we tracked 173 FBA businesses reported as sold which equated to $257 Million in List Price value. Whilst this is a large volume in transaction value, it’s significantly down on 2017 sales which ended at $329MM. That’s $72MM less year-over-year. 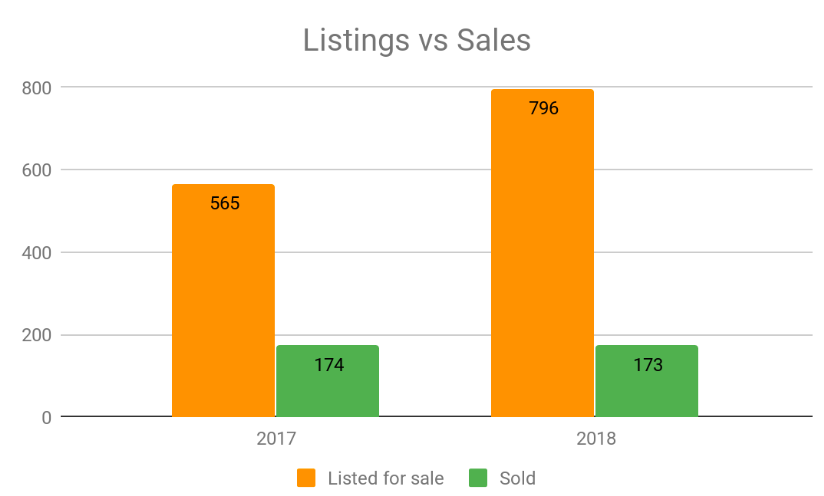 The IBBA reports that using an experienced advisor is the difference between a 49% chance of selling verse 25%. 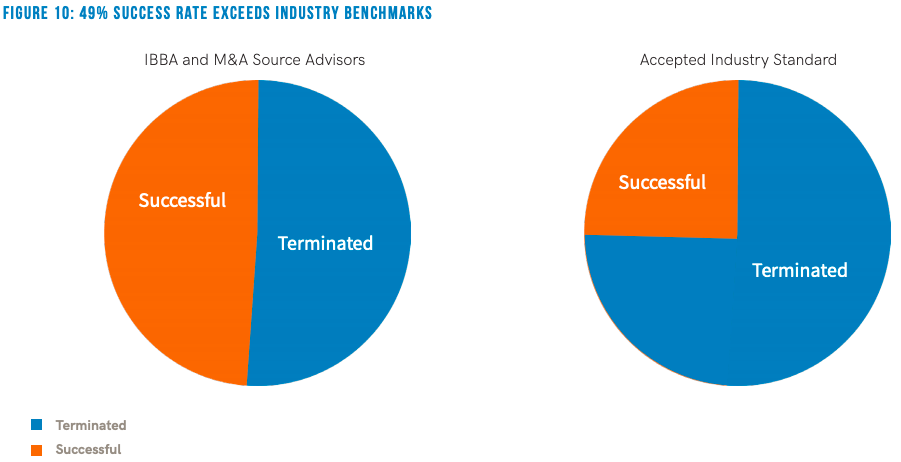 If we look at the sold listings by price segment we can see that the largest businesses, those with a list price over $5MM aren’t selling through nearly as well as 2017 (23% vs 52% respectively). However, it’s worth noting that at the close of 2018 there were 3 pending sales of listing in this range.

Seeing the lowest percentage of sold listings is in the $100K-500K range is expected. At this price range, it’s too small for private equity or independent sponsors to be interested, so that leaves individuals looking to buy themselves out of a job. The fear of loss, loss of their hard earned cash by buying a bad business, means these buyers are very conservative when searching for perfect deal….if one even exists.

We are also seeing the time to close increase due to this buyer choice, which we’ll talk more about in the Days on Market below.

A $73MM supplement business takes the honour of the largest FBA Business known to have sold in 2018. It was listed at a 5.1x annual net profit multiple, selling after 168 days or 5.6 months on the market

This is $17MM more than 2017’s largest sold listing which was a $55MM Health & Beauty FBA business. Our predicts that sold businesses were only going to get larger was certainly true.

Taking a closer look at the sales by quarter we can see 2 things:

Additionally, the days on market is trending up over time for the larger sized deals whereas is it shorter at the lower end of the market. We believe that with so much choice on the market buyers are taking their time to pick the right deal. 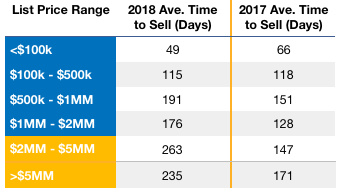 The IBBA also reports that time to close has increased and based on a survey of members they only expect 2019 to take longer.

“Advisors are slightly pessimistic that general business conditions will decline and margin pressure on businesses will get worse. And while they expect more deal volume in 2019, they anticipate that overall time to close will take longer.”

At the beginning of 2019 the marketplace had 230 active listings. Of these 53% have been on the market for more than 90 days.

A lot of entrepreneurs have a goal of one day selling their business for a meaningful amount. Of the 173 sold listings, 41 were listed at $1MM or above. Below is the top 7 Amazon Categories where they likely sold for 8 figures or more. 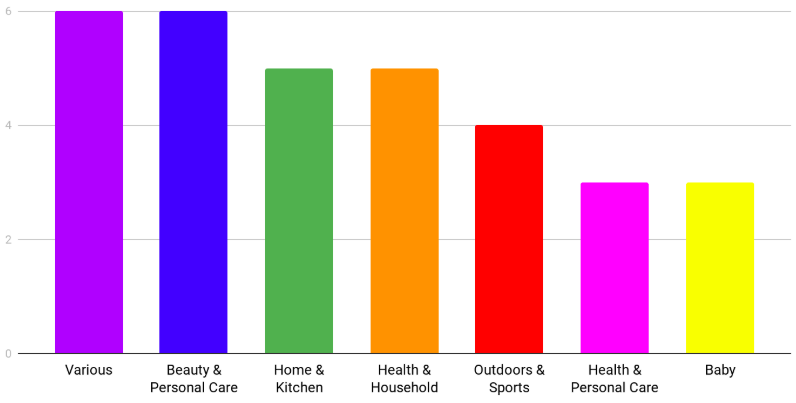 Various refers to the business selling in multiple categories, not just one niche. In 2018 we saw a lot of retailers with 5,000+ SKU’s sell their business which makes up a portion this ‘various’ section.

2018 saw a small decrease in multiples across almost all price points. The data also suggests that those businesses which did eventual sell were at a lower multiple than the median of all listings for sale. 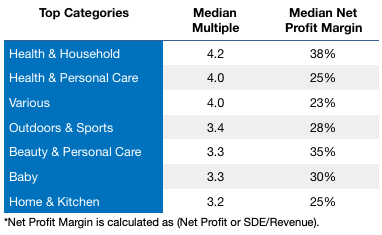 Home & Household comprises of a lot of sub-categories. For our data, we use Amazon’s Best Sellers list to categories each listing. You can review the Amazon Best Sellers by departments here.

We’ll be working on for category specific reports so you can see what your niche trends are. So stay tuned!

And for monthly updates on the market be sure to sign up for the FBA Business Price Guide here. 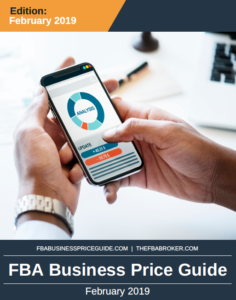